Carcharodontosaurus was your classic theropod. It had a large head almost 6 feet(1.8 meters) long! It's jaws were lined with sharp teeth over 5 inches long. Carcharodontosaurus had somewhat short arms and wasn't the smartest dinosaur out there. But with a top speed of 20 miles per hour and huge size, it didn't have to be very smart.

It's assumed that this dinosaur was an active, but solitary, hunter. Prey was pretty abundant. Medium sized herbivores like iguanodonts were common, as were large sauropods. Due to it's huge size, Carcharodontosaurus would have had little trouble stealing kills from other carnivores.

Carcharodontosaurus has not been featured in most media until recently. It made an appearance in the documentary Planet Dinosaur. Video games like Jurassic Park: Operation Genesis have also depicted this dinosaur. Because of it's sheer size and terrifying look, it's likely that Carcharodontosaurus will continue to make appearances throughout dinosaur related media. 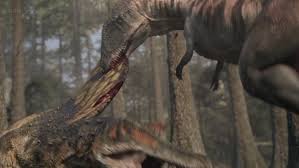 Retrieved from "https://everythingdinosaurs.fandom.com/wiki/Carcharodontosaurus?oldid=4113"
Community content is available under CC-BY-SA unless otherwise noted.