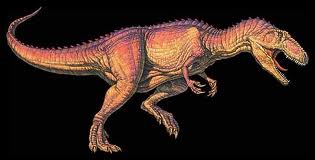 Giganotosaurus(giant southern lizard) was among the biggest land carnivores ever. It didn't take long for many to realize that this dinosaur challenged Spinosaurus and Tyrannosaurus for the title of largest land predator. Giganotosaurus lived in South America roughly 100 million years ago.

Giganotosaurus has the basic theropod body form. It had a large head nearly 6 feet(1.8 meters) long and long teeth. It's teeth were over 6 inches long. Giganotosaurus also had long legs and somewhat short arms. It's three fingers all ended in short, but sharp, claws.

Giganotosaurus is assumed to have been an active hunter(although it would have been able to scavenge when need be). Large sauropods and ornithopods were present in the region and would have made up the bulk of this dinosaur's diet. Some evidence has been uncovered suggesting that Giganotosaurus was a pack hunter.

South America had a fair amount of predators during the time of Giganotosaurus. Other carcharodontosaurs, spinosaurs, and abelisaurs were all present. This would have made hunting a little more difficult. However, because of it's size, Giganotosaurus still would have been at the top of the food chain.

Giganotosaurus may not be as popular as Tyrannosaurus or Triceratops, but it's certainly not unheard of. An albino Giganotosaurus was featured in the movie Journey to the Center of the Earth. Giganotosaurus has also been seen in a number of documentaries, books, and TV shows.

Retrieved from "https://everythingdinosaurs.fandom.com/wiki/Giganotosaurus?oldid=4137"
Community content is available under CC-BY-SA unless otherwise noted.