Start a Wiki
Microraptor(small thief) was one of the smallest dinosaurs ever found. This small dromaeosaur may have glided from tree to tree on it's never ending hunt for food. Microraptor lived in Asia about 120 million years ago.

Microraptor lived in China during the Cretaceous period. It was very small and had four wings which were used for gliding vast distances. It was a feathered Canivore, also measuring 3 feet(1 meter) in size.

Microraptor was rather a small dinosaur. Adults measured only 3 feet(1 meter) in length. It probably didn't weigh more than a few pounds. This makes it one of the smallest dinosaurs on record. 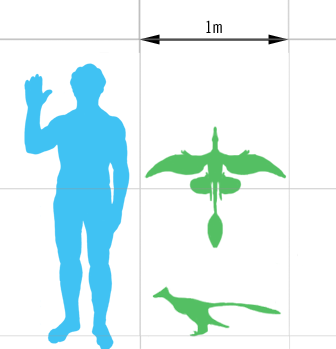 Microraptors ate small prey such as lizards. It probably ate other small creatures within it's hunting capabilities. It glided across the forest in search of prey.

Microraptor had four wings, one of each of it's hind legs and forearms. Many people say Microraptor could fly, however this is not true nor was it possible. Microraptor's wings were built for gliding, not for taking flight. It is suggested that Microraptor climbed high distances from trees and then jumped off to gain gliding power.

Retrieved from "https://everythingdinosaurs.fandom.com/wiki/Microraptor?oldid=4174"
Community content is available under CC-BY-SA unless otherwise noted.