Velociraptors were somewhat small animals. New evidence shows they were covered in feathers. Their long jaws held nearly 80 teeth. But their teeth were not their primary weapons. The sickle claw on the second digit of each foot is what they used the most in combat. This claw was nearly 4 inches 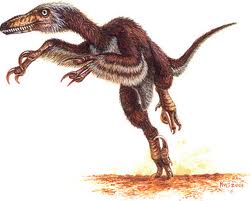 The size of Velociraptor is often exaggerated in popular culture. The real animal was only about 6 feet(1.8 meters) long.

An adult Velociraptor probably didn't weigh more than 100 pounds. When depicted in movies and TV shows, Velociraptors are usually 6 feet(1.8 meters) tall. That's twice the height of the real animal!

Velociraptor was one of the smartest dinosaurs on record. Tests show they were at least as smart as modern day birds. Others suggest Velociraptors may have been as smart as a lion or wolf. This would allow for complex social behavior and hunting methods.

Velociraptors were probably pack hunters. This way, they could bring down prey much larger than themselves. A number of herbivores were present at the time of Velociraptor. Ceratopsians like Protoceratops were common. Hadrosaurs and other dinosaurs were also present. Velociraptor would not have been above scavenging or hunting small mammals or reptiles either. These dinosaurs could have hit a top speed of nearly 45 miles per hour.

Velociraptor was not an overly popular dinosaur until the release of Jurassic Park in 1993. After this, it's fanbase skyrocketed. Dozens of movies, games, shows, documentaries, and books have featured this killer dinosaur. Velociraptor is often ranked as one of the most popular dinosaurs, right alongside Triceratops and Tyrannosaurus rex.
Retrieved from "https://everythingdinosaurs.fandom.com/wiki/Velociraptor?oldid=4172"
Community content is available under CC-BY-SA unless otherwise noted.